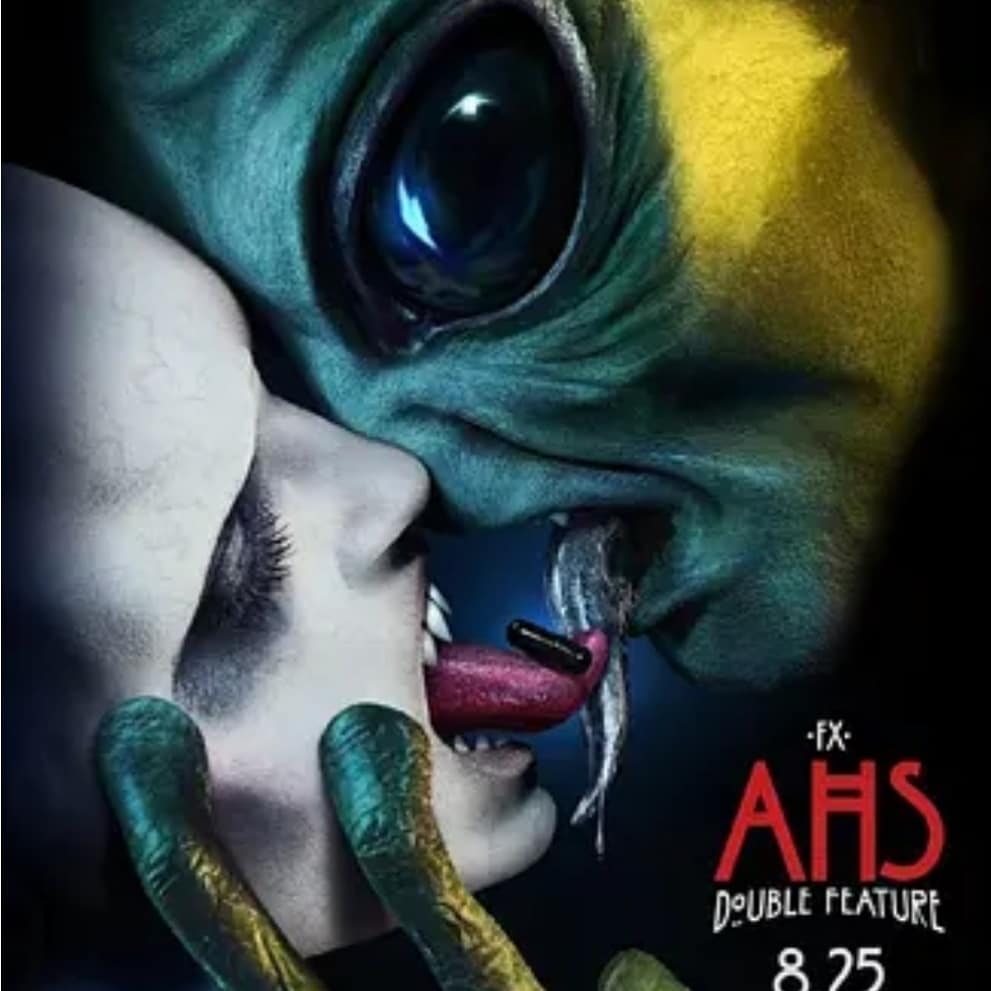 We open on Alma getting a Silkwood shower from Doris because, you know, she found Alma eating a rabbit, and this really gets Doris’ Lyme disease paranoia going off, but it also informs Harry that his daughter took one of the black pills. Chief Burleson shows up right on cue and just as she says she’s going to take Alma down to the station, without her parents, Doris has a contraction that lands her in the hospital. We learn that she has suffered two previous miscarriages and now she has to stay on bedrest for the rest of the week. Yay! Mom is out of town! Father/daughter homicidal bonding time!

“Alma, I’m worried that I’m not being a good father to you, that I’m letting you do this because of my own ego.” Wow. Harry isn’t just a terrible father, but also a deep introspective type, huh? As they are having this conversation, Alma has only had one pill and he is already using the term, ‘letting you do this’. Did Harry even want to have kids? No judgement if he didn’t, but if he wanted Alma and this is the best he’s willing to do, it’s heartbreaking.

In his defense, he tells Alma, “I haven’t always been the best dad to you. I work too much and my own father was a piece of garbage, so I have terrible parenting instincts.” Oy. Then, FIX YOURSELF, HARRY! Of course, this isn’t a Hallmark Channel show, so he allows his daughter to tell him that she’s going to do what she wants to do because she’s a wee Patrick Bateman. She only cares about herself and then goes as far as to ask why they stay with Doris. “She’s not a great mom or a great wife and her design stuff is kind of lame. We don’t need her.” Wow, Alma, Wow.

We all knew Harry’s first solo trip to get food wouldn’t go well, but I definitely did not anticipate an extreme horror homage to the rape scene in Pulp Fiction. I do hope that there is footage of Harry eating those tweaker rapists because that camera was still filming.

Ursula show up for an unexpected visit and this opens up a whole host of issues and questions. Quentin Tarantino has agreed to direct a series for Hulu based on Harry’s writing because, “That mother fucker is a better writer than I am.” Also, Quentin just got married and that makes it hard for him to do what he has to do to write and Harry would understand. So, continuing on my assumption from last week that Murphy and Falchuk were throwing shade, Falchuk (he is the only writer credited on this episode) is either doubling down or he is legitimately complimenting Tarantino: the basement rape scene and now the implication that he takes Muse. Compliment or not? I suppose we may never know.

Belle and Austin are doing some pretty amazing Captain and Tennille at The Muse restaurant while Mickey keeps making eyes at Ursula. Ursula makes some pretty rude, yet on point, remarks about the entertainment, which prompts Austin and Belle to come speak with her. Austin snaps his fingers as he walks over and I am here for this musical reference. Nerdy in-jokes aren’t stopping at that, though. Nope, we get an Outsiders and Point Break nod in as well. Austin walks away, snapping his fingers while I laugh maniacally.

Walking on the beach, Ursula agrees to read Mickey’s scripts and we all know that they will be amazing because he took Muse and now we have even more to discuss. In The Little Mermaid, Ursula the sea witch grants Ariel access to the world that she wants to be a part of; just like this Ursula can get Mickey into Hollywood. Mickey lives in a sad, little shack that is filled with his life treasures and he makes a deal with Ursula to get what he desires most; to be a part of her world. Obviously, the Disney version is what most of us know, but The Little Mermaid is a Hans Christian Andersen fairytale, which means it’s super fucked up. It’s possible that this can tie into the siren theme that so many fans were hoping for. Of course, in AHS, I’m assuming The Muse is the actual siren. It does draw you in and then require bloodshed. Anyway, much can be made out of Ursula or perhaps she just has an old fashioned name like Alma, Doris and Harry do.

31 years later, Kevin McCallister finds himself in the role of house burglar as Mickey steals Muse from Belle so Ursula can start her corrupt talent agency. Meanwhile, West Side Story:Red Tide is going on with Harry, Belle and Austin, complete with more finger snapping. Saving blood as takeout food only alerts Austin and Belle to the fact that Harry has done something stupid and they now learn that Alma is taking Muse. Basically, all of this points to things ending poorly for everyone in this car, but I’m more interested in how pale Austin looks despite the fact that he just ate. In fact, he looks even paler by the end of the episode. Maybe the pale people walking around town aren’t talentless, but there is an expiration date on the effects of Muse? Like Meth or opioids, sooner or later, they take your life and if you think this isn’t a giant commentary on classism, you’re not paying attention. The rich, white people popping pills are literally feeding on the poor, white pill poppers? Rich? Your drug addiction is necessary, illicitly romanticized, and dangerous in the sexy way. Poor? You are literal trash that no one is going to miss and this is what you get for being talentless and poor. So, where does this leave Mickey? Notice he is the only one who hasn’t turned into an asshole after taking Muse. He actually tells Ursula he feels bad about being tasked with killing her.

Belle pays Mickey a visit and informs him that he will now need to start bringing her thermoses of blood when he makes a kill. When he tells her that she will have to buy him a thermos, she says, “Your poverty offends me.” We do not deserve Frances Conroe.

Or Denis O’Hare. ALL HAIL DENIS O’HARE!! If a season of AHS happens without Denis O’Hare, did it really happen at all? Holden Vaughn is an interior designer who usually stays in P-Town during the summer (of course he does), but he is here right now because his favorite greyhound passed away in his Manhattan townhouse and he can’t go back there until he mourns appropriately. He does enjoy it in P-Town in winter because it’s quieter, “Except for those pale, strange, homeless creatures wearing the AIDS era couture.” Dead. *coffin emoji, cry laughing emoji * I am beyond happy to have Denis O’Hare back and I can’t wait to see how Holden plays into all of this.

Mermaid door knocker on the home of The Chemist: hello, Angelica Ross! 1984 wasn’t my favorite season of AHS, but she was an undeniable standout and it’s very exciting to see her. Nice intercutting scenes of Ursula and Mickey trying to get her to work for them and The Chemist telling Belle and Austin that she wants this problem dealt with. We also learn that the recipe for Muse is not written down anywhere and even if a chemist could reverse manufacture it, they still wouldn’t know how to cook it up. This is a very interesting statement: much can be made out of this. So many questions about what exactly is in Muse and why the production process is so special. Aliens were mentioned in this episode and the second half of this season is about aliens AND Angelica Ross is the only actor who’s character is in both stories.

Alma showed us who she is when she told her mother what she really thinks of her, so it’s not much of a surprise when she kills Chief Burleson. It’s a shame because Adina Porter is one of my favorite new additions to the AHS universe, but we knew she wouldn’t be long for this world when she said that she didn’t look the other way in town like the old Chief did.

Red Tide is only six episodes and then we go into the Area 51 part of the Double Feature. So far, they are proving my personal opinion that short seasons force the story to move at an appropriate and engaging pace. There is no time for a random side story to come up that will never have resolution or, seemingly, have nothing to do with the story at all. AHS tends to flirt with this particular issue a lot and it’s been great to have these three episodes move along really nicely while not feeling rushed. The teaser for next week’s episode promises us a look at Belle’s past, but it also looks like we get to see Evan Peters as a drag queen? To my eyes, it looks as though Austin was doing a second rate Hedwig and the Angry Inch show before taking Muse and if that’s the case, I can die a happy woman after seeing this particular incarnation of Mr. Peters.

-Is it legal for Chief Burleson to speak with Alma alone?
-Harry’s incredulity at the suggestion that he stay in Hyannis was hilarious.
-Rosebud, Daisy Chain…flower references don’t make it sound nicer.
-Why does Alma eat the blood like soup? She should just chug that shit like Gatorade.
-Ursula is right; getting to P-Town is a bit of a trek.
-Is Austin a Shark or a Jet?
-Chief Burleson is the one who mentions all of the old fashioned names and she definitely has
a point. It’s a bit curious.