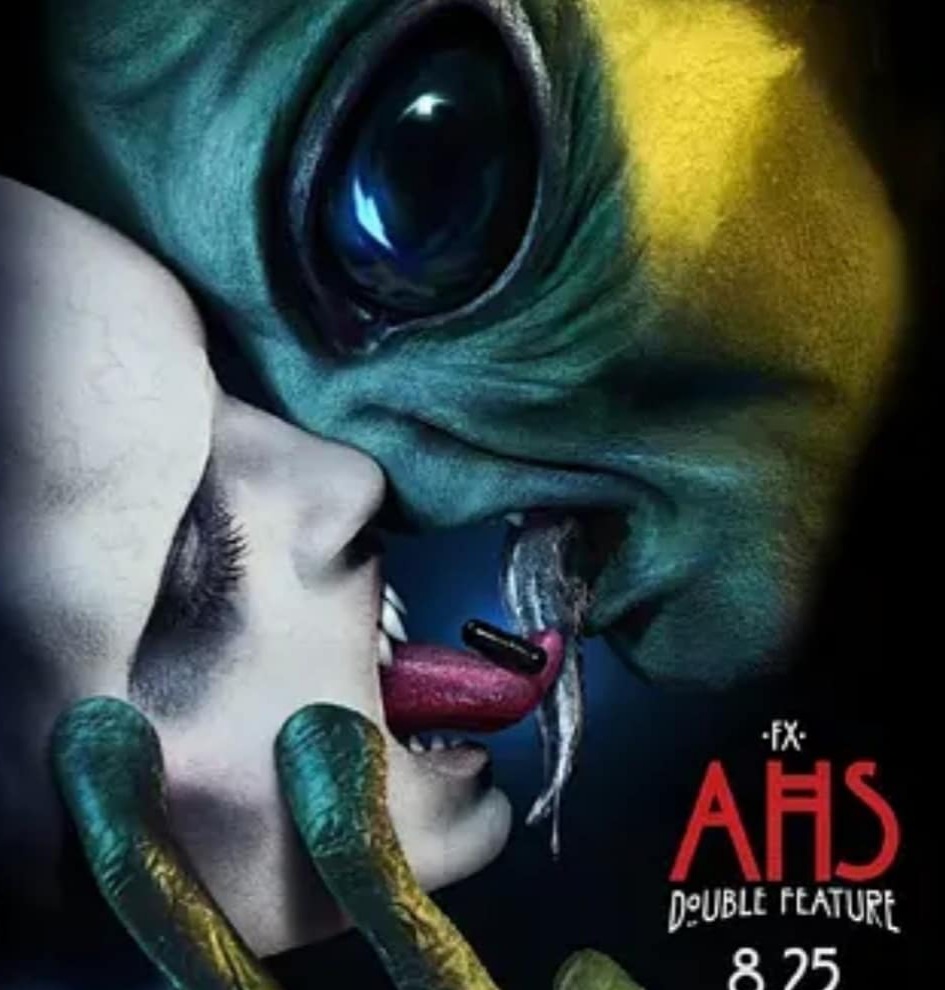 After three episodes of exhaustive fan theories speculating on the black pills, episode four just lays it all out for us in a very neat package. Five years ago, The Chemist came to P-Town after leaving her job at a lab and now she wants some privacy. Why Holden immediately assumes she’s a chemist and wants to build a meth lab is moderately intriguing, but maybe they are just moving the story along as much as possible because that’s what this episode feels like. We had three episodes of patented AHS weirdness, but there are only six episodes in Red Tide, so this episode was A LOT of backstory: no fluff, no filler, just an episode explaining how we all got to where we are now. With Léon and Matilda 2.0 completely forgetting about poor, greige Doris in the hospital and a Hollywood agent trying to take over The Chemist’s turf. Once again, Red Tide could also be the spooky, bizarro version of Breaking Bad.

The Chemist tells Mickey that she worked with the military trying to understand and unlock the creative parts of the brain. Confused, he asks if they were trying to make more creative soldiers, but no, they were trying to create less creative soldiers, people who can’t think for themselves. The Chemist has discovered that creativity comes from the occipital lobe: talented people have, denser, more numerous clusters of neurons in the area. So, she makes a drug that targets the area. It makes the neurons fire at 1000 times faster and more frequently than normal. Animal testing, yada, yada, yada, aggression and cravings for blood. We know how it works because that’s what we’ve been watching for the past three episodes. What I don’t understand is why she was making the creative area of the brain work better if that’s exactly what the military was trying to erase. Whatevs, she officially makes Mickey her headhunter for anyone who would be desperate enough to go to a stranger’s house and take a black pill because they think the only reason they aren’t famous is because they haven’t…gone to a stranger’s house and accepted a mysterious pill. Logic isn’t always high on the priority list for this show.

Mickey and TB Karen are enjoying a causal drink and meth while taking in the local karaoke and she says she enjoys off season because the tourists are gone, the galleries are closed and, “None of the paintings inside mock me when I walk by.” This comment still leaves a lot of questions about her personal history with Muse. Has she taken it? Looking at the paintings of hers that Mickey purchased from the thrift store, it would appear that she does have talent.

You know who doesn’t have talent? The poor singer that Mickey sends over to The Chemist.
This poor guy orders a Bloody Mary when his thirst hits. I found this particularly stupid until later when he said that he’s a vegan. “I don’t even eat those Impossible Burgers.” Needing a jacket is our pathway to running into Leslie again and it also conveniently explains why he looks like Nosferatu. He chooses the most vampire-y jacket to ever vampire, goes to the cemetery and eats some poor woman. I do feel bad for this guy because his intentions are pure, but if you don’t have talent, you’re screwed. Brad Falchuk is really driving home this idea that people who aren’t talented are so disgusted by their own mediocrity that they turn into literal bloodsuckers.

Belle Noir’s back story is fun mostly because it’s Frances Conroy in the role. She’s always so amazing at playing a meek and timid woman. A self published author on a self funded book tour, Belle finds herself with a troll of a husband who doesn’t appreciate her at all. Nothing an evening with Mickey can’t fix. They hang out, do some meth, dance and then she meets The Chemist. She completes a novel, kills her husband and feeds off of his blood. Belle is the perfect candidate for The Chemist and Muse. She gives zero fucks about the side effects of the pill as long as she can live out her dream and you know what? Good for her. *insert Lucille Bluth gif

Fast forward two years, Belle sees Austin doing some seriously atrocious Drag. Patio Furniture is definitely not going to be America’s Next Drag Superstar. I had hoped for a Hedwig moment from Evan Peters, but it’s just some flopping around to Heart. For whatever reason, Belle takes pity on him, she learns that she’s the reason he is in the sad state he finds himself in and she rectifies it. They take Muse, kill all of those other queens that were being shady as filth and the rest is Broadway history.

Overall, this episode was great because it really cleared up a lot of things and was still fun. Strangely, the direct storytelling is what felt off. We usually have to parse through a million things and run ourselves ragged making up complex reasons for the myriad whys of the show, but Falchuk just put it all out there for us. Fans are mostly agreeing that this season has, so far, been one of the best in a while and I wonder how much of that we can attribute to the fact that Murphy and Falchuk have been the writers on all of the episodes thus far.

-Holden has been in P-Town for 50 years.Does he know way more than we think?
-Is this the “Halloween episode” that we used to consider appointment television?
-Anyone else get a tiny Manchurian Candidate vibe from The Chemist’s story?
-The Muse restaurant has trays of salt water taffy and lollipops on the bar? Why is this not
mandatory at all bars?
-Holden saying, “Eewww” to the body parts on the shore was perfectly humorous.
-The sign in front of the candy bowl at The Chemist’s house says, TAKE ONE, BITCHES.