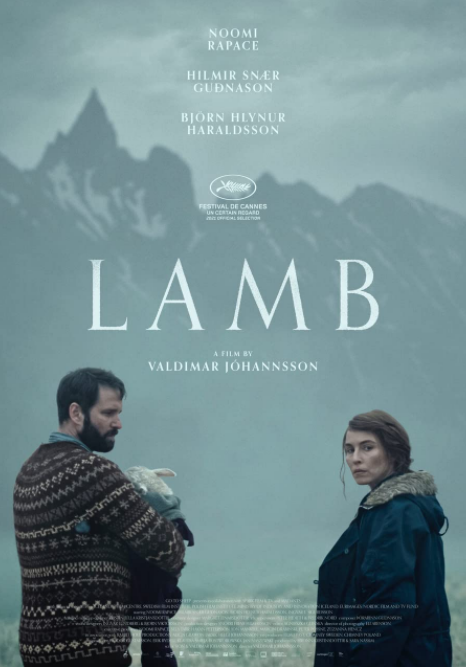 It’s spooky season, so that means it’s time for A24 to deliver a film that people will be reluctant to file under horror, but make no mistake: Lamb is a horror film. It’s easy to be distracted by the gorgeous landscape of Iceland and the simple, idyllic life of María and Ingvar, but Lamb is a folk horror film that subtly explores grief and the selfishness of humanity.

On Christmas Eve night, we inhabit the POV of a heavily breathing creature that makes it’s way to the sheep farm of María and Ingvar. While they enjoy a meal of what one can only assume is lamb, the sheep in the barn are greeted by the unseen intruder and while we do not see what transpires next, we can easily fill in the blanks when María and Ingvar later deliver a half human, half sheep baby. Up until this point, the two have been quietly existing in their countryside bubble, far from others and though there is a whiff of grief, they seem to genuinely love one another. This unexpected baby is a blessing in a truly bizarre form and she will, ultimately, help heal some wounds and breathe happiness back into their existence. But not without a cost.

Spoiler alert: I do think going into Lamb cold is probably best, especially where the visuals and reveal of Ada is concerned, so I would certainly recommend doing that and then coming back to this review.

María and Ingvar are a couple who use very few words and it is no exception when they see the half human/half sheep baby. María has a look of shock and utter confusion that slowly turns to cautious joy. When delivering the other lambs, María was sure to give the baby immediately to it’s mother so nature can take it’s course, but with this baby, María immediately claims her as her own and takes her into the house and begins treating her like a human baby.

With the head, upper torso and right arm of a sheep, but the rest of her human, Ada is easy to love and cuddle and while she immediately takes to the comforts of the home, she also responds to her mother who comes to bay at her window. Ada’s mother didn’t even get to see her baby before María took her and it is this human ability to just take and take and take that will be everyone’s downfall.

As the three settle into their new life, their newfound happiness is palpable, but the maternal instincts of both of Ada’s mothers comes to a head and a truly cruel act foreshadows what is yet to come. But not before Pétur, Ingvar’s brother comes to stay for a surprise visit.

Pétur is the family member that everyone has: the fun, wild one who also always needs to be saved from themselves. When he first meets Ada, he is absolutely disgusted, but Ingvar tells him that they are happy and his brother is not to intrude on that. Pétur has a couple of moments where his human ugliness threatens Ada, but he, too, falls in love with her because how can you not? Through the magic of CGI, puppetry and young actors, Ada is absolutely lovable and sweet. Just like any young child, she is bashful around strangers, exceedingly loving to her parents and full of curiosity towards the world around her. The four of them fall into a very happy and easy routine, but this is, after all, a horror film and just when you forget about the dangers of the world, mother nature reminds you that she is the number one girl in the group and she is not happy with how selfish and callous you have been with her creations.

Lamb is a visually stunning film that relies mostly upon the sounds of animals and nature to tell it’s story. Initially, it’s obvious that the humans are living off of the land and working for the animals, but when they take something that doesn’t belong to them, a subtle chain of events is kicked off that will end in heartache for everyone involved. While it would have been nice for the grief aspect to have been a bit more upfront, it’s still a joy to witness María and Ingvar’s rebirth. I would have also liked a bit more on the hints that Ada was beginning to realize how, perhaps, she wasn’t just like her parents. Ultimately, Lamb does manage to say a lot with very little, but not every viewer is going to fall under it’s spell and for some, the ending will be too little too late with the reveal of Ada’s father. Noomi Rapace (María), who is also a producer on the film, is absolutely outstanding, especially in the film’s final moments. Lamb could have come on a bit stronger, but the languid pace and natural beauty of the landscape do lull you into the same feeling of peace that the characters feel and that only makes the ending that much more bleak.