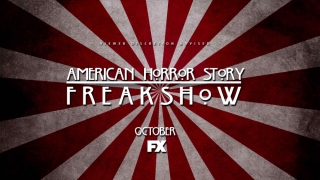 @lcfremont covers off on AHS: Freak Show – Monsters Among Us…

Ater the awesomeness that was Coven, the hype over American Horror Story: Freakshow has been at an 11 this entire time between seasons. It is always perilous to get overly excited about something that you have never seen. I can only speak for myself when I say that I have learned my lesson with Ryan Murphy back when he adapted Running With Scissors and then, once again when AHS: Asylum premiered. Fool me once, shame on you, fool me twice, shame on me….well, this girl was not about to get swept up in the almost deafening fan furor over Freakshow and that may be why I had quite a lovely time watching the premiere episode.
For whatever unknown reason, all things strange seem to be housed in Florida which is where our story is set; Jupiter, Florida via 1952. I sure do wish we still had milk men. Of course, they would be delivering wine and not milk, but details.

While I understand that in order for the story to progress, our sweet milk man has to go search upstairs after finding the corpse in the dining room, but who does this in real life? I’m not sure that I would have even entered the house and most definitely would not have gone any further to find out what other gruesome discoveries were awaiting me.

It’s a shame that they shared so many pictures of our freaks before the show premiered because the suspense that was very expertly built up over the reveal of Bette and Dot was extremely watered down; we already knew what was behind that curtain. Talk about ruining a Wizard of Oz moment. As always, Sarah Paulson is absolutely killing it as the Siamese twins. The use of split screen to illustrate their two different perspectives is clever, indeed. Paulson’s ability to play the vastly different dispositions of Bette and Dot with such subtlety is simply sublime. Let’s hope it stays that way and doesn’t slowly down-spiral into the overacting that became of my beloved Dylan McDermott in Asylum. Don’t you just love Dot? Girl, I would stab a bitch if they didn’t let me go see Singing in the Rain in glorious Technicolor, too. 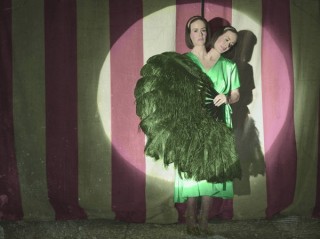 Alright, let’s get Twisty the Clown out of the way, shall we? Much was made of the terrifying nature and appearance of Twisty and while his introduction was definitely a beautiful dichotomy between ugliness and the surrounding dreamy, vivid colors I found him a wee bit underwhelming. Twisty is undeniably scary looking and unnerving, but something about that creepy mouth not moving just isn’t provoking the correct amount of terror out of me, however, I am very interested to learn more about his motivations and reasons and I am definitely loving his weapon of choice. I have no doubt that Twisty the Clown will soon be visiting me in my nightmares.

Oh Jimmy Darling, with that cute face, amazing hair and magnetic charm you’re able to make even Bette smile with just the wink of an eye. Initially he was set up as nothing more than a bit of a scoundrel who has an uncanny ability to pleasure the under-served 50’s housewives with those hands that are in the formation of, well, I’ll say what everyone was thinking, in the shape of ‘the shocker’. Please, please, please tell me that Jimmy Darling washed those magical hands in between clients. I got no problem with people satisfying their needs, but I will not condone unsanitary conditions.

The introduction of Bette and Dot to the freak show allows us to finally meet the rest of our Freak Show. Kathy Bates, she of the stellar performance in Coven, is our resident bearded lady, Ethel Darling, and she has a piss poor man’s haircut to go along with that unkept beard of hers. I wonder if the explanation of her accent is hidden within that beard? Regardless, she’s Kathy Bates and she rules the world and she clearly has a very intense devotion to Miss Elsa. In Ethel’s memory, Elsa is absolutely angelic, all the way down to that devil handbag of hers being white rather than it’s true avocado green. This backstory already proves to be very layered and I’m excited to see how their relationship develops.

Just about the moment when you’re asking yourself where Frances Conroy is, she breezes in as if she was reading your thoughts. Gloria Mott and that son of hers, who is a disgusting little piece of mamma’s boy brattiness, seem to have the same proclivities towards those considered freaks that Elsa does. Conroy was a delight and should teach classes in how a lady throws shade, but I do hope that she was just being mean spirited when she told Elsa that her performance was the most freakish thing of all because that musical number was the bee’s knees. It was a little bit Rocky Horror Show meets Old Hollywood and I adored every single second of it. Clearly, Ms. Lange was only teasing us with that Name Game ditty in Asylum. This. Was. Perfect.

Overall, this was a pretty solid premiere episode, but all of AHS pilot episodes have been. The look of the show is a perfect mix of old-movie color vibrancy mixed with a hint of uncleanliness. As always, all of the details, from the sets to the wardrobe to the hair and makeup, are impeccable. The tone has been set and it’s a nice mix of delighting in our differences, meeting new characters and learning more about life while a black cloud of anger, hatred and murder hang over everything. Only time will tell if Bette singing a Fiona Apple song will end up being awful or amazing and like every season before it, Freak Show will be continually walking a very fine line of genuine story telling without slipping too far into the over the top territory. I suppose that’s the wonder of Ryan Murphy and Brad Falchuk, though. For everyone, like myself, who found Murder House to be perfection all the way through, Asylum to be a bit of a misstep and Coven to be mostly even with a few treacherous leaps into nonsense, there is another person who views all of this completely opposite. Let the debates begin TV babies.

P.S. Do I have to wait until episode three to see my beloved Denis O’Hare? Unacceptable!