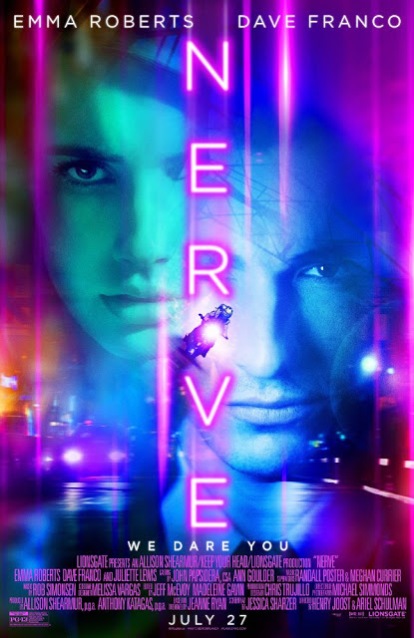 Been awhile my darlings but I’m back! While this isn’t a horror per se I’m sure I can win this round of “Who’s That Final Girl?” mostly because I’m picking The Internet! The Internet always wins (right?)…even in completely crap shows, like a lot of 2016’s offerings (yes, the entire year.)

As you might have guessed I’m picking something easy. I am picking something that reminds me of the 90’s movie that I was terrified by feardotcom. I was 8 or 9 when that movie was out. So, Nerve is up on deck tonight. The opening shots in this make me worry the entire film is going to be shot from Vee’s laptop. Cheap filming budget that way I suppose.

Vee is obviously pretty but sheltered, where as her friend Syd is not. She’s edgey she’s clearly a leader and she plays Nerve. Of course she’s not doing it because she wants attention. (No, not all.) Vee of course, decides to play after getting embarrassed by a boy, because that’s a valid reason…apparently.

I somehow, thought this was going to be more like feardotcom. But, it’s more like a strange everyone on youtube is having more fun than you kind of thing. I’m one of these people who whilst watching films, recognize what other films actors have been in together so I was waiting, expecting Emma Roberts (Vee) and Dave Franco (Ian) to be using magic but I digress.

In Nerve crazy things are done for money, and the guy who supposedly uses the dark web is really trusting with unknown numbers calling him? (dummy!) Oh, and somehow Vee and Ian manage to one up everyone, ending up as the Final Girl(s) and winning this game.