Originally, the Halloween episode of AHS was an event. The episode that landed near Halloween on our calendar would also be the episode when the AHS characters celebrated Halloween. Murder House set the standard of us expecting a particularly creepy episode (sometimes a two parter) that would give special insight into the characters as well. With the shorter season of Apocalypse, we find ourselves celebrating All Hallows Eve before our calendar even hits October, but for all we know they are doing the same thing in Outpost 3. How on earth does Venable know exactly what day it is, much less when cocktail hour is? Besides, all she really wants is an excuse to execute the most blatant of all of the blatant biblical references so far this season. But I’m getting ahead of myself. 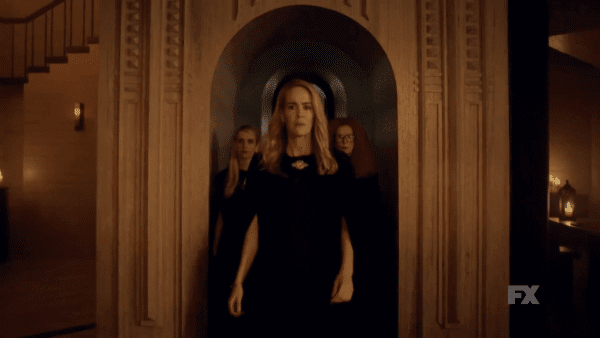 Opening the episode with the various cooperation interviews between Langdon and the survivors, we learn quite a bit. Most notably, of course, is the realization that Mallory seems to be harboring a witch inside of her soul. Is there a literal other person inside of her or has she managed to suppress this side of herself her whole life? Whatever the answer is, it brought out Langdon’s true self. In a much more subtle scene (yes, they exist in this world) Langdon tells Dinah that it’s nice to see her again. Um, excuse me? She then tells him, “You know I’m not powerful enough to stop whatever it is that you’re up to.” Cut to her son talking about how she is straight up evil. This is a very interesting development. Did the faux Oprah gain her status by making a previous deal with Langdon? Coco’s interview was, unsurprisingly, void of any kind of value, but we did get this awesome quip from Langdon; “No, true darkness requires a certain depth of character, but you’re much too shallow for any meaningful negativity.” Ouch.

All of this “night vision of the soul” takes a serious toll on Langdon and he is compelled to contact his father. In a truly gorgeous and wildly erotic scene that straight up reminded this viewer of the full frontal Julian Sands scene in Warlock 2, Langdon uses his own blood to draw a pentagram and speak with Lucifer. The camera loves Cody Fern and he really let himself go in this scene and it all just worked so deliciously well. Oh yeah, actual stuff happened during this conversation. Langdon moans that he thought “he had destroyed all of them”. All of what? All of the witches?

Last week I threw out what I thought was a wackadoo notion that Ms. Meade may be a robot. Well, turns out, she is a robot. She even dressed as one for Halloween in 1962 and quickly tossed aside the apple she was given. Her first horror film was Rosemary’s Baby because I guess the apple throwing wasn’t symbolic enough. Ms. Meade’s flashbacks were all very amusing and her first kill which she described as a romantic kind of waltz was awesome and summed up her entire character. She then speaks of a blonde boy: a memory she hazily holds onto and she loves this little boy. In a melancholy moment, she says that she now no longer knows what her purpose is.

A fan favorite from Cult, you just knew Billy Eichner would be back: if you don’t see someone die, then they probably aren’t dead. In the nuclear winter, Brock has turned into a Mad Max extra and acquired some serious badassery as well. Brock ain’t got time for the former Top Chef finalist BBQing a human leg or the former special ed teacher. He wants to know where the special shelter for rich people is and he’s going to kill anyone in his way. He seems to have acquired some impressive upper body strength as well because dude hangs onto the undercarriage carrying the apples all the way to the bunker.

Just like in the Garden of Eden, the apples make for a very interesting decision and for anyone who has never been to Sunday School, Ms. Meade says, “They’re a gift from the gods, they’re divine providence, the answer to our prayer.” (Robots pray and believe in gods?) Ultimately, Meade and Venable decide to poison the apples and present them as gifts at a party. Essentially, every bible story and fairy tale you have ever heard is all wrapped up into this storyline.

I appreciate the bobbing for apples as a nod to Murder House, but everyone knows that Chad Warwick (Zachary Quinto) would have preferred Gala apples over Red Delicious. It was also very sneaky to have Coco dressed as Marie Antoinette when that is exactly who Chad was carving into his pumpkin for his Famous French Figures theme. As always, the lyrics of the song playing in the common room are very on the nose. “I just can’t live without your loving and affection, giving me direction, like a guiding light to help me through my darkest hours.” Enter Brock dressed as a plague doctor. Coco believes it’s actually Langdon in costume, so she offers up some anilingus only to be stabbed in the forehead by the lover that she FUCKING LEFT IN SANTA MONICA. Elsewhere, everyone is eating their apples and it all turns into a real Jonestown. Riding high on her vengeance, Venable thinks she’s going to murder Michael Langdon only to have the gun turned on her. Let’s face it, the backbone of Outpost 3 was literally physically damaged; Venable was never going to survive the apocalypse. And now things get super crazy. Michael tells Ms. Mead that he had The Cooperative build her as a replacement for a woman that he held very dear to his heart as a young man. So, he’s the boy she has in her memories and now they are reunited and we are all assuming that he is saying that Ms. Meade is a robotic version of Constance Langdon from Murder House. Now listen, I know we all miss Jessica Lange and Kathy Bates did a stellar job in Coven when she was just a head, but you simply cannot cut off Lange’s head and replace it with Bates and consider me satisfied. And lets’ be real. Nobody can fill Constance’s shoes. NOBODY. 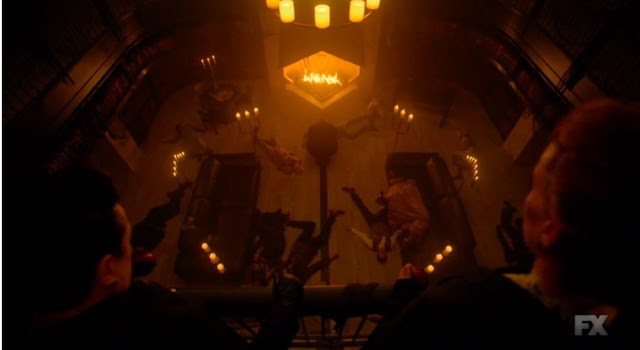 In the common room, the music changes to She’s A Rainbow, a Rolling Stones song that comes off of the Their Satanic Majesties Request because Apocalypse seems to love to bludgeon us to death with it’s heavy handed allusions. It also heralds our very first moment of true crossover with characters from Coven. Cordelia, Myrtle and Madison are untouched by the nuclear winter and they have arrived at Outpost 3 to find their sisters. Sisters who have been inside Dinah, Mallory and Coco. Coco? Really? She must be hidden very, very, very deep. And Madison uttering her iconic “Surprise Bitch” line makes me wonder if it’s Fiona Goode or Zoe Benson that she’s speaking to. And while we’re here…Mallory quite literally rose like a phoenix from the ashes which is something that she directly spoke to earlier in the episode. Last week, it was the Jim Croce song Time In a Bottle that was playing in the common room. Evan Peters (Mr. Gallant) plays Quicksilver in the X-Men films and there is a scene in Days of Future Past where Quicksilver does some fancy mutant stuff to the tune of Time In a Bottle. And now Mallory pulls a Jean Gray by rising like a phoenix. Does Marvel own the franchise and they are subliminally trying to get you to the theatre for the upcoming Dark Phoenix film? There was, after all, a commercial for the film tonight. Looks as though Disney owns all of us.

We finally saw characters from another franchise show up and it was pretty damn exciting. With the promise of episode five changing everything up and the knowledge that episode six will gift us with Constance, it would seem that some pretty epic stuff will be happening next week.

Why would Langdon want Mallory and Dinah for The Sanctuary if they’re witches and he thought he had gotten rid of all of the witches?
Langdon showing his true face only cemented my opinion that he is killing a Lestat cosplay.
Where are all of these horses coming from?
I mean, could the apples BE any more biblical?
How are they going to create costumes? Is there a Michael’s craft store and a thrift store hidden somewhere in this bunker?
Why go through so much trouble if Langdon had always planned on having Ms. Meade execute the poison apple plan?
Seeing a needle in the apple makes me nostalgic for trick or treating in the 80’s.
All of the vomiting was very Witches of Eastwick.