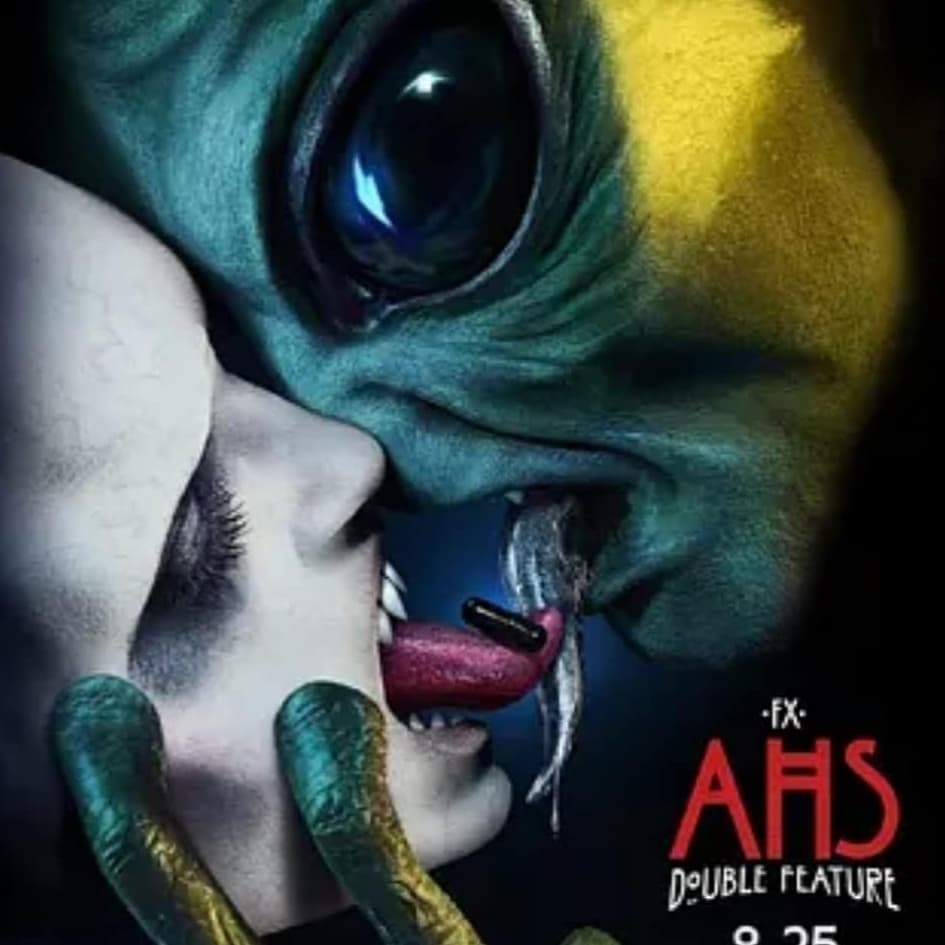 We open up in the black and white part of Death Valley and Mamie, who has been taken over by an alien, is making Ike sign the treaty that will allow the aliens to abduct U.S. citizens in exchange for sharing technology. After not hearing from the aliens for years, Valiant Thor shows up. He is the liaison between both parties and he is going to supervise the process at hand: the creation of a new species, neither human nor us, but able to survive on this world. He shows them that his brain is a wee computer and then gives them an ipod.

Apparently, Mamie is taking credit for adults celebrating Halloween. Initially, it was really cool to see Sara Paulson playing Mamie Eisenhower, but the fact that she’s been reduced to someone who only cares about being remembered more fondly than Elanor Roosevelt is lame. And her thing with adults celebrating their birthday and now Halloween? Beyond lame. She is, however, credited with coming up with the idea for Area 51 in Nevada, so I guess that’s something. The way they are making her play smart and stupid at the same time is infuriating, quite frankly.

Ike finds the tunnels underneath the White House because he hears screams through the air ducts. Valiant Thor gives him a tour of all of the experimentation being done down there and also throws shade that Ike didn’t know the tunnels existed. “Might want to keep a closer eye on that military budget, Mr. President.”

Marilyn Monroe is back and, apparently, her breakdown that she had while filming Something’s Got to Give was actually her talking about the aliens. And now all of the conspiracy theorists have the real answer: Marilyn was killed by the government so she would stop talking about aliens.

Now we are with Troy as he has his baby. Once he sees it, he develops instant paternal instinct, but they murder the baby right in front of him because it has physical abnormalities. So, now Troy is emotional about the family he will never have, which I suppose is an upgrade from him yelling about how the baby is coming out of him. Calico shows up and tells these four idiots that they can’t escape Area 51. She’s been here since the 60’s and been giving birth to about three babies a year. She then takes them to her favorite place. The moon landing.

Calico was a cocktail waitress who did sex work on the side and one night she recognized Buzz Aldrin and Neil Armstrong. They shouldn’t have been in her bar, though, because they were supposed to be in outer space, having just landed on the moon. She pours them a drink and they tell her all about filming the moon landing. They even tell her how the director was crazy and make a passive aggressive remark about Hollywood. WE GET IT. Hollywood is looked down upon. GET OVER IT, BRAD FALCHUK. Anyway, Calico is taken by the Men in Black and wakes up pregnant, still in her white go-go boots. She stumbles onto the moon landing set and sees Stanley Kubrick. Kendall asks why Kubrick would film a fake moon landing and Calico blames it on Richard Nixon; he loved Dr. Strangelove and Kubrick got a lifetime contract from Warner Brothers with no constrictions. Also, the government and the aliens decided to just do a fake moon landing because, obviously, travel to outer space was already possible and they thought this would help ease the humans into the idea of all of this technological stuff. Like Velcro.

Cal is going into labor, but he doesn’t want to tell anyone because he doesn’t want them to take her. Troy takes him to the moon landing set and they decide that Troy will deliver the baby because this is their chance to start their family. I know they are out of sorts from being impregnated by aliens, but they really didn’t think this one through. Where are they going to take the baby and live? How will they feed the baby? And what kind of diapers do you buy for a baby that has octopus arms for the lower half of it’s body? Well, it’s a non issue now because the baby totally ate Cal’s face and, I’m sorry, but it was fucking hilarious.

Next week is the season finale and the brief synopsis says, “Mamie takes things into her own hands and the fate of the future is revealed.” It’s highly suspect that a woman who cares more about making fudge and celebrating adult birthdays is the one to dictate the fate of the future, but with the way the second half of this season has gone, maybe it really is the best that they can do. At this point, the only thing I really hope happens is that we see how/if the two parts of this season are connected. Red Tide was good until it unceremoniously lost it’s way and Death Valley has been all over the map with what it wants to be and I would simply be thankful for some sort of cohesion. Even if it’s just a strip of Velcro.

-Cody Fern looks like he absolutely belongs in this time period.

-Anyone else miss the Halloween episode of AHS?